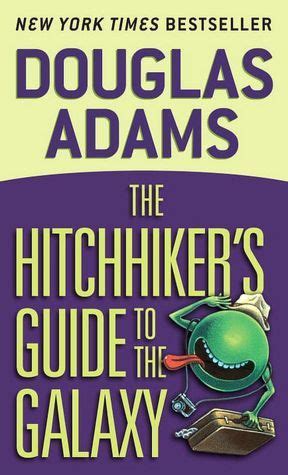 Seconds before Earth is demolished to make way for a galactic freeway, Arthur Dent is plucked off the planet by his friend Ford Prefect, a researcher for the revised edition of The Hitchhiker’s Guide to the Galaxy who, for the last fifteen years, has been posing as an out-of-work actor.

Together, this dynamic pair began a journey through space aided by a galaxy full of fellow travelers. Zaphod Beeblebrox – the two-headed, three-armed ex-hippie and totally out-to-lunch president of the galaxy; Trillian (formerly Tricia McMillan), Zaphod’s girlfriend, whom Arthur tried to pick up at a cocktail party once upon a time zone’ Marvin, a paranoid, brilliant, and chronically depressed robot; and Veet Voojagig, a former graduate student obsessed with the disappearance of all the ballpoint pens he’s bought over the years.

Where are these pens? Why are we born? Why do we die? For all the answers, stick your thumb to the stars!

Of all the space-faring literature out there, The Hitchhiker’s Guide to the Galaxy is by far the most intriguing and entertaining. Adams writes with tons of British-style humor and healthy dose of satire.

Arthur Dent’s story is like any other adventure tale when you lay out the plot but Adams does a fantastic job of reinvigorating this very old genre. The book began as a radio comedy broadcast in the late seventies and has since become a six-book series with many film and TV adaptations. If you like the movie, the book is guaranteed to keep you entertained.

Adams brilliance is in creating a story that takes very real feelings and issues and extrapolates them to absurdity. There’s a lot of deep thinking that can come up in its pages, but you don’t have to read too far into the book to enjoy it. It’s a delicate balance that few authors can walk as Adams does. Honestly, it’s more like reading a string of punchlines than anything else but at the core of the novel, you’ll find fresh questions posited on reality and the meaning of life itself.

Photo and synopsis from Amazon