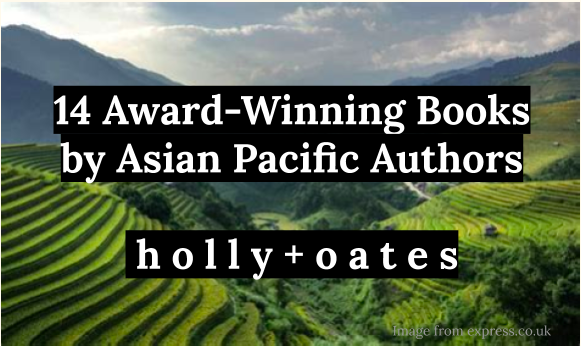 Literature is an amazing way for us to connect – to learn and begin to understand the lives, trials, and joys of others. I’m definitely guilty of pop-reading so its easy for me to get into a cultural rut and dismiss the idea that there’s more out there than what’s on my bookshelves.

In honor of Asian Pacific Heritage Month, I pulled some works from notable authors who have been recognized for their writing. I’ve only read a few of these but the others are about to help me expand my scope of reading

I’m going to start and end by cheating this list a little. Language of Geckos isn’t an award-winning collection but it is literature from a very underrepresented and under-recognized culture.

Gary Pak has emerged as one of the most important Asian Hawaiian writers of our time. In this new collection, Pak expertly crafts a memorable cast of Hawai’i’s Korean Americans, Chinese Americans, Japanese Americans, and native Hawaiians, amplifying our cross-cultural understanding of Hawaiian life today.

The worlds of Pak’s Hawaiians, Asian locals, and the haoles sometimes intersect and collide and other other times remain parallel, but each world is haunted by the past. Whether Pak evokes shadows of World War II, the Vietnam War, the radical sixties, or the military dictatorship of Chun Doo Hwan in Korea, the larger historical context looms ominously in the background as wounded memories of characters in despair.

2) The Sympathizer by Viet Thanh Nguyen

The Sympathizer is a sweeping epic of love and betrayal. The narrator, a communist double agent, is a “man of two minds,” a half-French, half-Vietnamese army captain who arranges to come to America after the Fall of Saigon, and while building a new life with other Vietnamese refugees in Los Angeles is secretly reporting back to his communist superiors in Vietnam.

The Sympathizer is a blistering exploration of identity and America, a gripping espionage novel, and a powerful story of love and friendship.

It begins with a body. On a clear day in winter, the battered corpse of Crispin Salvador is pulled from the Hudson River. Gone, too, is the only manuscript of his final book, a work meant to rescue him from obscurity by exposing the crimes of the Filipino ruling families. Miguel, his student and only remaining friend, sets out for Manila to investigate.

The result is a rich and dramatic family saga of four generations, tracing one hundred and fifty years of Philippine history forged under the Spanish, the Americans, and the Filipinos themselves. Exuberant and wise, wildly funny and deeply moving, Ilustrado is a daring and inventive debut novel that “begins as a murder mystery and develops into an ambitious exploration of cultural identity, ambition, and artistic purpose.” (The New Yorker)

4) The Garden of Evening Mists by Tan Twan Eng

Yun Ling Teoh, the scarred lone survivor of a brutal Japense wartime camp, seeks solace among the jungle-fringed tea plantations of Cameron Highlands. There she discovers Yugiri, the only Japanese garden in Malaya, and its owner and creator, the enigmatic Aritomo, exiled former gardener of the emperor of Japan.

Despite her hatred of the Japanese, Yun Ling seeks to engage Aritomo to create a garden in memory of her sister, who died in the camp. Aritomo refuses but agrees to accept Yun Ling as his apprentice “until the monsoon comes.” Then she can design a garden for herself.

As the months pass, Yun Ling finds herself intimately drawn to the gardener and his art, while all around them a communist guerilla war rages. But the Garden of Evening Mists remains a place of mystery.

5) Patron Saints of Nothing by Randy Ribay

A powerful coming-of-age story about grief, guilt, and the risks a Filipino-American teenager takes to uncover the truth about his cousin’s murder.

Hoping to uncover more about his cousin and the events that led to his death, Jay Reguero is forced to reckon with the many sides of his cousin before he can face the whole horrible truth – and the part he played in it.

As gripping as it is lyrical, Patron Saints of Nothing is a page-turning portrayal of the struggle to reconcile faith, family, and immigrant identity.

6) The Astonishing Color of After by Emily X.R. Pan

Leigh Chen Sanders is absolutely certain about one thing: When her mother died by suicide, she turned into a bird.

Alternating between reality and magic, past and present, hope and despair, The Astonishing Color of After is a luminous debut novel about finding oneself through family history, art, bravery, and love.

7) The Woman Warrior: Memoirs of a Girlhood Among Ghosts by Maxine Hong Kingston

In her award-winning book The Woman Warrior, Maxine Hong Kingston created an entirely new form – an exhilarating blend of autobiography and mythology, of world and self, of hot rage and cool analysis. First published in 1976, it has become a classic in its innovative portrayal of multiple and intersecting identities – immigrant, female, Chinese, American.

As a girl, Kingston lives in two confounding worlds: the California to which her parents have immigrated and the China of her mother’s “talk stories.” The fierce and wily women warriors of her mother’s tales clash jarringly with the harsh reality of female oppression out of which they come. Kingston’s sense of self emerges in the mystifying gaps in these stories, which she learns to fill with stories of her own. A warrior of words, she forges fractured myths and memories into an incandescent whole, achieving a new understanding of her family’s past and her own present.

Clay Walls weaves the complex threads of Korean culture into the tapestry of American society while telling the story of the early Korean immigrants, who arrived in Los Angeles in the decade prior to World War II, and of their American born children.

Two irreconcilable strains of Eastern tradition are rerated as one by a disinterested America which fails to distinguish one Asian immigrant from another. Within the walls of their home, however, a family wages unrelenting war over their differences. It remains for their children, born in the United States, to integrate these conflicts and, ultimately, find their place in the New World.

When sixty-nine-year-old So-nyo is separated from her husband among the crowds of the Seoul subway station, her family begins a desparate search to find her. Yet as long-held secrets and private sorrows begin to reveal themselves, they are forced to wonder: how well did they actually know the woman they called Mom?

Told through the piercing voices and urgent perspectives of a daughter, son, husband, and mother, Please Look After Mom is at once an authentic picture of contemporary life in Korea and a universal story of family love.

10) Where the Mountain Meets the Moon by Grace Lin

In the valley of Fruitless mountain, a young girl named Minli lives in a ramshackle hut with her parents. In the evenings, her father regales her with old folktales of the Jade Dragon and the Old Man on the Moon, who knows the answers to all of life’s questions.

Inspired by three stories, Minli sets off on an extraordinary journey to find the Old Man on the Moon to ask him how she can change her family’s fortune. She encounters an assorted cast of characters and magical creatures along the way, including a dragon who accompanies her on her quest for the ultimate answer.

A love story, a mystery, a fantasy, a novel of self-discovery, a dystopia to rival George Orwell’s – 1Q84 is Haruki Murakami’s most ambitious undertaking yet: an instant best seller in his native Japan, and a tremendous feat of imagination from one of our most revered contemporary writers.

12) The Reeducation of Cherry Truong

The Reeducation of Cherry Truong tells the story of two fierce and unforgettale families, the Truongs and the Vos: their harrowing escape from Vietnam after the war, the betrayal that divided them, and the stubborn memories that continue to bind them years later, even as they come to terms with their hidden sacrifices and bitter mistakes.

From the bestselling author of Everything I Never Told You, a riveting novel that traces the intertwined fates of the picture-perfect Richardson family and the enigmatic mother and daughter who upend their lives.

Little Fires Everywhere explores the weight of secrets, the nature of art and identity, and the ferocious pull of motherhood – and the danger of believing that following the rules can avert disaster.

14) Iep Jāltok: Poems from a Marshallese Daughter by Kathy Jetnil-Kijiner

As the seas rise, the fight intensifies to save the Pacific Ocean’s Marshall Islands from being devoured by the waters around them. At the same time, activists are raising their poetic voices against decades of colonialism, environmental destruction, and social injustic.

Marshallese poet and activist Kathy Jetnil-Kijiner’s writing highlights the traumas of colonialism, racism, forced migration, the legacy of American nuclear testing, and the impending threats of climate change. Bearing witness at the front lines of various activist movements inspires her work and has propelled her poetry onto international stages, where she has performed in front of audiences ranging from elementary school students to more than a hundred world leaders at the United Nations Climate Summit.

The poet connects us to Marshallese daily life and tradition, likening her poetry to a basket and its essential materials. Her cultural roots and her family provides the thick fiber, the structure of the basket. Her diasporic upbringing is the material which wraps around the fiber, an essential layer to the structure of her experiences. And her passion for justice and change, the passion which brings her to the front lines of activist movements – is the stitching that binds these two experiences together.

This one may not be studded with awards but it is considered the first publish book of poetry by a Marshallese writer and that’s an accomplishment all its own.

All photos and synopsis are from Amazon