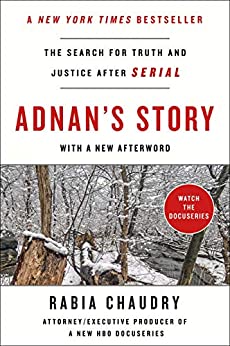 In early 2000, Adnan Syed was convicted and sentenced to life plus thirty years for the murder of his ex-girlfriend Hae Min Lee, a high school senior in Baltimore, Maryland. Syed has maintained his innocence, and Rabia Chaudry, a family friend, has always believed him. By 2013, after almost all appeals had been exhausted, Rabia contacted Sarah Koenig, a producer at This American Life, in hopes of finding a journalist who could shed light on Adnan’s story. In 2014, Koenig’s investigation turned into Serial, a Peabody Award-winning podcast with more than 500 million international listeners.

But Serial did not tell the whole story. In this compelling narrative, Rabia Chaudry presents new key evidence that she maintains dismantles the State’s case: a potential new suspect, forensics indicating Hae was killed and kept somewhere for almost half a day, and documentation withheld by the State that destroys the cell phone evidence — among many other points — and she shows how fans of Serial joined a crowd-sourced investigation into a case riddled with errors and strange twists. Adnan’s Story also shares Adnan’s life in prison, and weaves his personal reflections, including never-before-seen letters. Chaudry, who is committed to exonerating Adnan, makes it clear that justice is yet to be achieved in this much examined case.

I was late to the game with Serial – I caught up early last year – so I haven’t been in the loop on this case for most, if not all, of its events. And while I enjoyed listening to Serial, the true-crime follower in me was blown away by Koenig’s investigation. To her credit, Koenig was clear on her lack of experience to handle this story; namely, that she is not a crime journalist or investigator.

But I also felt that there was a lot missing in her coverage: (1) how much of the case was she familiar with before the tapes started rolling and (2) to what extent did she weigh speculation and hearsay against facts.

Adnan’s Story fills in some of those gaps. Though it is written with a bias towards Syed’s innocence, there is still a lot of valuable information in its pages that anyone casting judgment on this case should be aware of.

To those afraid of legalese or dry analysis, Adnan’s Story does a great job of breaking down the barrier between layman and lawyer. It also does a great job of positing the real questions everyone should be asking. AND then providing some insight into how to answer them.

Chaudry does a great job of providing strong facts and differentiating speculation from deductive reasoning and legal precedence. Her relationship to Syed (through her younger brother) is boldly told – there’s no cover up or lies told about how she became involved in the case. Transparency like that is absolutely necessary in a book like Adnan’s Story.

[This is essentially the end of the book review.]

I took a lot of things with a grain of salt and tried to step away from my own ideas and, most importantly, assumptions about Hae Min Lee’s case. I think that’s necessary for anyone who picks up this book. Even with that, there was a lot of compelling evidence that the investigation was done poorly and that neither Lee nor Syed received justice.

Lee’s case was not handled with the kind of diligence I believe law enforcement should hold. Syed, whether guilty or innocent, did not have a fair process of law. These conclusions I make largely on the police reports and court proceedings that can be verified. But every reader, listener, and citizen will have to make their own decisions on those points.

Regardless of your already-held perspective on Hae’s case, Adnan’s Story presents the questions that have yet to be answered. If he is guilty, we should want to know without a shadow of a doubt. In order to make that conclusion, there are points in the state’s case that must be remedied because, as it is, Maryland’s narrative does not make sense. And if he’s innocent, we need to figure out how this could injustice happened, how to prevent it from happening again, and who should really be held responsible.

Not all these issues fall on the public to resolve but they’re definitely worth talking about.

Photo and synopsis from Uncle Bobbie’s Coffee and Books