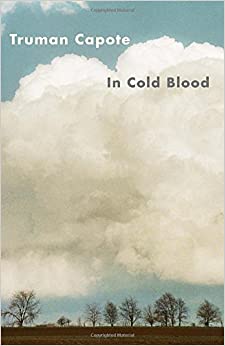 The most famous true crime novel of all time and one of the first non-fiction novels ever written; In Cold Blood is the bestseller that haunted its author long after he finished writing it.

On November 15, 1959, in the small town of Holcomb, Kansas, four members of the Clutter family were savagely murdered by blasts from a shotgun held a few inches from their faces. There was no apparent motive for the crime, and there were almost no clues.

As Truman Capote reconstructs the murder and investigation that led to the capture, trial, and execution of the killers, he generates both mesmerizing suspense and astonishing empathy. In Cold Blood is a work that transcends its moment, yielding poignant insights into the nature of American violence.

It feels wrong to say that I enjoyed a book as dark and morbid as In Cold Blood. It feels better to say that it was gripping and well-told, which it was. Capote’s writing style is poetic but without the frills that make reading older novels difficult. It’s astounding to me that he was able to put this book together – it reads like a work of fiction but there’s enough pulled from police files and statements to know that the bones of this story are all horribly true.

I expected to be horrified by some of the book’s details but I was poorly prepared. Once I thought I had gotten past the point where the most awful details would be, I had to stomach worse and worse passages – it’s definitely not a read for the faint of heart.

I still think it’s unfair to call it non-fiction. Inspired by real events, maybe. Capote took a lot of liberty in details he couldn’t have possibly known or discovered. From other things I’ve read on In Cold Blood, the book wouldn’t have existed in its form at all had it not been for Harper Lee’s ability to relate to the midwesterners connected to the Clutter family murders – and her diligent note-taking.

I agree that its clout is well earned and worth the read for most people. However, I’d also want readers to not accept every detail as fact and do their own research into what the Clutter family was really like if it suits you to do so.

Photo and synopsis from Amazon